On Monday, the first day of summer, it was hard not to focus on the scorching Southwest, where 110-degree-plus temperatures spilled far outside their typical geographic range for this time of year, in part thanks to an atmospheric feature called a “heat dome.” (Back in 2011, this phrase had an earlier headline moment, deconstructed at the time by Erik Eckholm for The Times.)

This Twitter item from Ryan M. Maue says much about the heat, centered in Arizona but spreading far and wide: 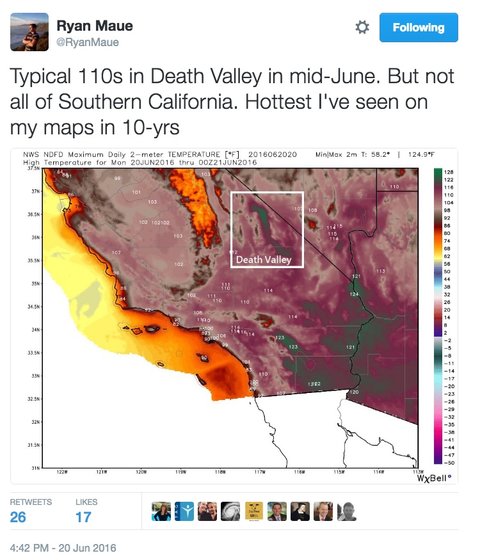 A Twitter item from meteorologist Ryan Maue at the peak of the heat spike in the Southwest on Monday, June 20.Credit Ryan Maue

Maue, a meteorologist for Weatherbell Analytics, a company doing advanced analysis of storm and temperature probabilities for a variety of clients, predicted the extreme heat in the Southwest more than a week ago. Read more from Andrew Freedman at Mashablefrom back on June 14.

The few, the proud, the physically fit: 86% Of Women Fail Marines' Physical Tests

The few, the proud, the physically fit: 86% Of Women Fail Marines' Physical Tests